Did you know that the open rate for sports marketing emails is one of the highest of any industry?

On the other hand, this should not come as too much of a shock. Emails with a sports subject typically focus more on engaging the audience than they do on selling something specific. In order to make people feel less threatened when opening them.

The significance of this channel to the sports sector is further highlighted as a result of this development.

When you connect with your audience and audience members in their inbox, you open up a direct line of communication that is unmatched by any social network. If your approach to selling your sports products via email isn’t cutting it, you’re going to slip further behind the competition.

I’ve compiled a list of the six most effective emails that prominent sports brands have sent out in order to assist you in making the most of this marketing channel. 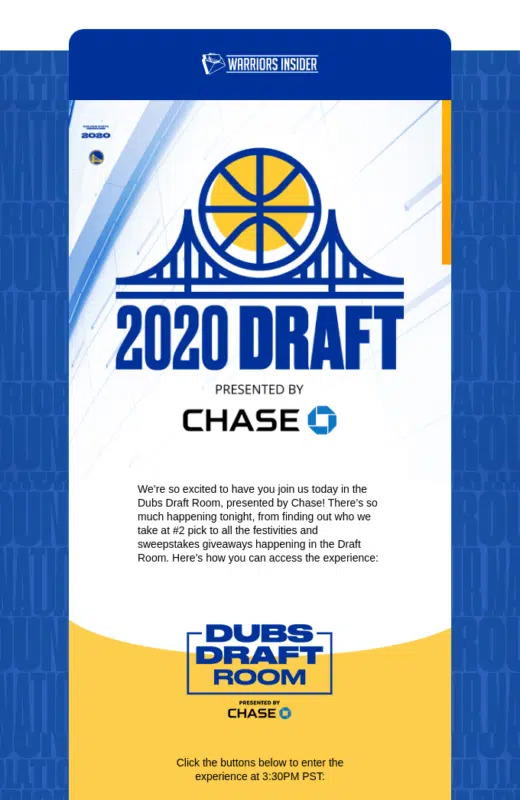 This email sent out by the Golden State Warriors is focused on interacting with the team’s fans. For basketball fans, the NBA Draft is one of the most anticipated events of the year, so it makes sense for the league to try to generate as much interest as possible among its audience.

This email has a stunning design that is also consistent with the Warriors’ brand. However, the utilization of interactive experiences was the primary factor that drew my attention to it. In addition to the email, they have made available to fans an online “Draft Room” in which they may watch the draft in real time, interact with one another, compete for prizes, and access many other features.

What are some of the most important events that will take place in the world of sports throughout the year? Is there a way that you could provide your audience with a similarly interactive experience?

Raphna is a brand of cycling apparel and accessories that has a presence all over the world.

The fact that they do more than simply “sell” stuff is one of the things that I like best about their email marketing efforts. The majority of eCommerce companies will only send out an email to their subscriber list when they are running a promotion or when they are trying to boost their overall income.

Email marketing is about more than simply a short-term boost in sales — it’s about the community that surrounds your business. Not only do they sell a collection of goods, but the most successful sports businesses also sell a way of life. (Even though emails regarding products are also very necessary!)

This is accomplished by Raphna by timing a kickoff event to coincide with the Chicago Cyclocross Series (which they sponsor). both spectators and riders the chance to mix and mingle while providing them with food and drink to enjoy during the event. 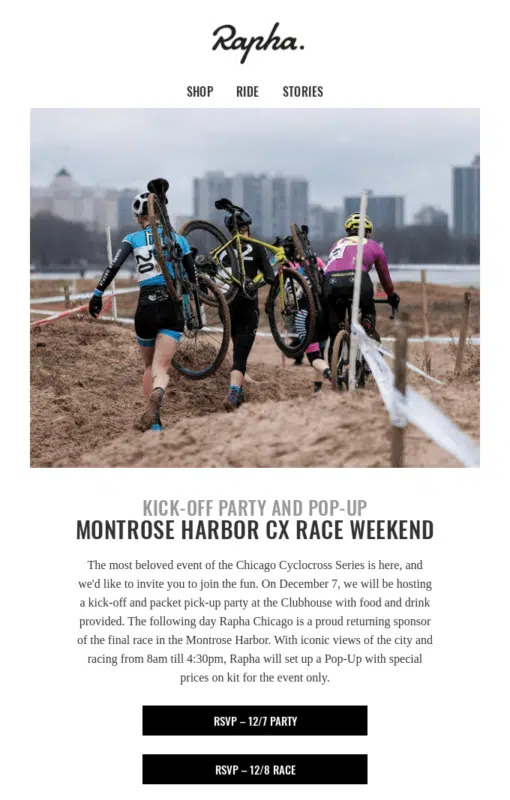 These recurring events are wonderful opportunities to cultivate a community around your brand and “stick” it in the minds of your most devoted customers by providing them with opportunities to interact with one another. In your email marketing calendar, what is the next event that will take place in the community?

One thing that stands out to me about all of these instances of sports email marketing is how much of an emphasis there is placed on audience participation. This is something that the Chicago Fire performs exceptionally well below. 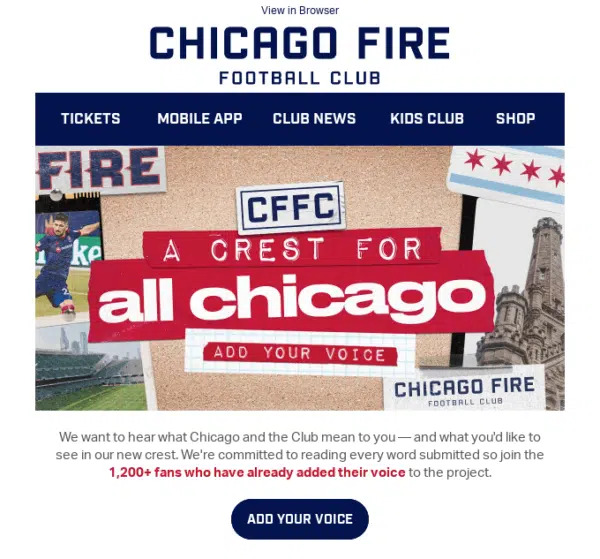 In this particular scenario, they are developing a new logo for the team and are soliciting feedback from fans regarding the elements that should be included. It is a clever strategy to capitalize on the emotional connection that the fans have with the city and to forge a connection that will last a lifetime with the new crest (and team).

Obviously, you won’t be able to come up with a brand-new crest or logo every other week. But you may use this instance as a model to figure out how to incorporate your audience in other decision-making processes. It could be selecting the refreshments that will be served at your upcoming home game, or it could be selecting the player who will be interviewed.

Your relationship will be strengthened if you provide your audience a choice and include them in the activity that your team is doing.

If you offer things, you can learn from the most successful eCommerce emails by promoting those products in a way that makes use of vivid colors, photographs of high quality, and direct invitations to take some sort of action.

For example, Callaway Golf highlights its new wedge by using visual language, a large text, and a shot of the golf club that is really breathtaking: 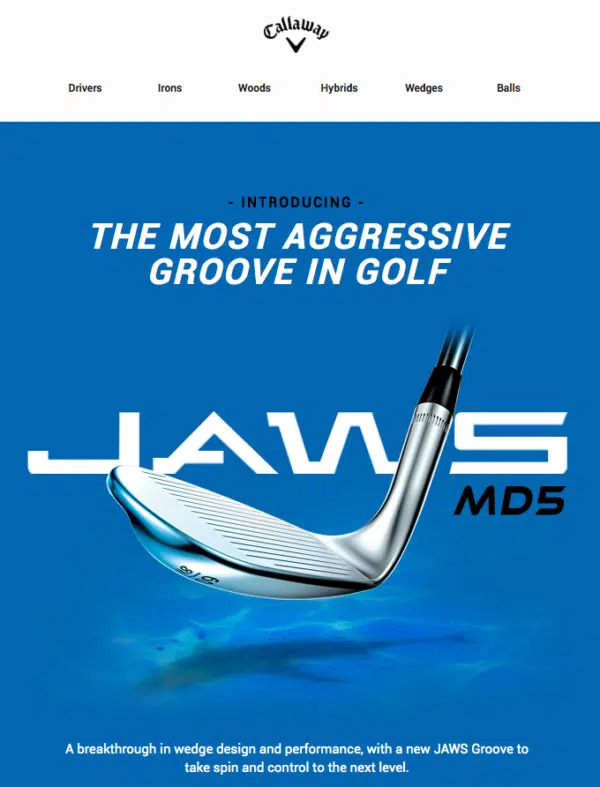 Certainly, you should prioritize community interaction; nevertheless, when you send an email promoting one of your goods, you should ensure that it stands out from the rest.

An example of effective sports email marketing, this message from Bose promotes the company’s collaboration with the United States Ski and Snowboard Teams. 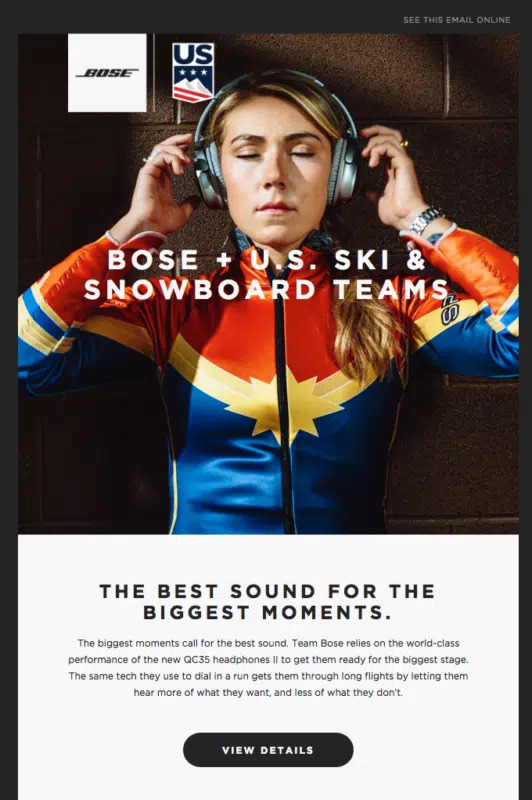 Creating strategic alliances with other companies that are complimentary to yours enables you to reach a larger audience. On the other hand, doing so connects the image of your organization with that of another. The United States Ski and Snowboard Team is synonymous with high-level athleticism and the stirring of patriotic fervor. Bose is hoping that by connecting itself with them and promoting it via email, its customers will see it in a manner that is comparable. It does so by associating itself with a perception.

Do you have any strategic connections with other companies that make products that compliment yours? If you don’t already have one, think about how you could benefit from starting one.

Formula 1’s emails are very visually appealing. They stood out from the crowd by using a dark background, buttons in vivid colors, and images that grabbed people’s attention.

The following illustration is not about how it seems; rather, it focuses on how it interacts with fans. As I was saying before, engaging fans and providing them with interactive experiences is becoming an increasingly popular strategy to dominate sports email marketing. This email is a fragment of a live poll that Formula 1 is doing to collect feedback from its fans regarding race driver partners: 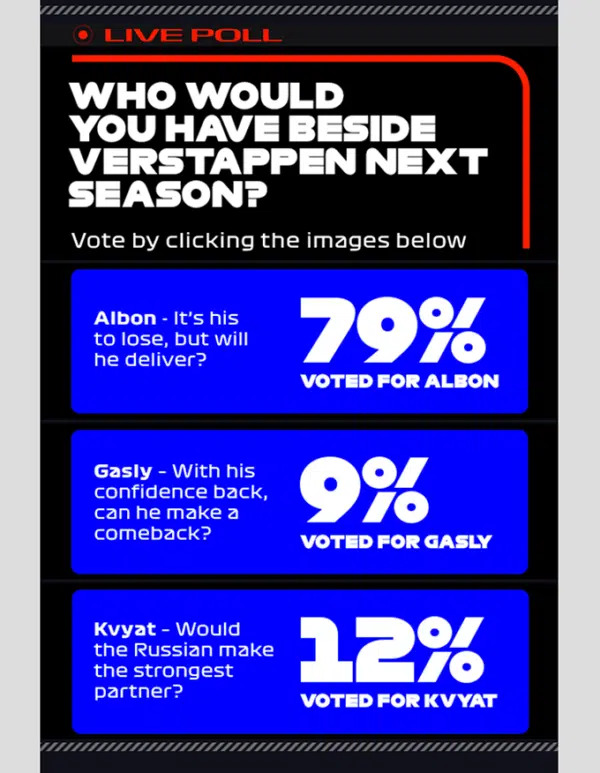 You should ask yourself this question before including a poll in your next email marketing campaign: “What do my subscribers care about right now?” What are the current fads?

One of the most important lessons to be learned from these email marketing campaigns for sports is that your plan should be varied.

Look for ways to interact with your audience at the various events that take place throughout the year. Send emails centered on your products that feature gorgeous pictures. Encourage participation from fans by providing them with engaging experiences. Collaborate with other companies whose products are complimentary to yours in order to extend your reach and build trust through affiliation.

All-in-all, get creative. You can’t merely expect to get fantastic results from sending uninteresting update emails to your readers. Utilize the best examples as a jumping off point for creating your own version of the concept. 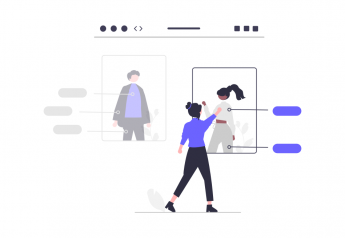 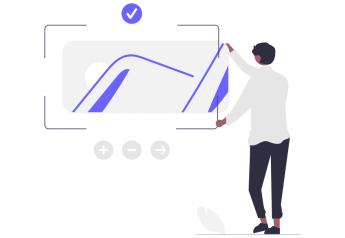 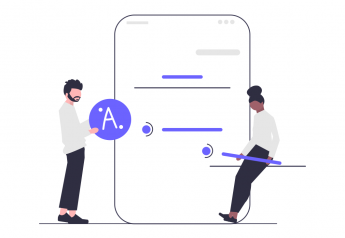